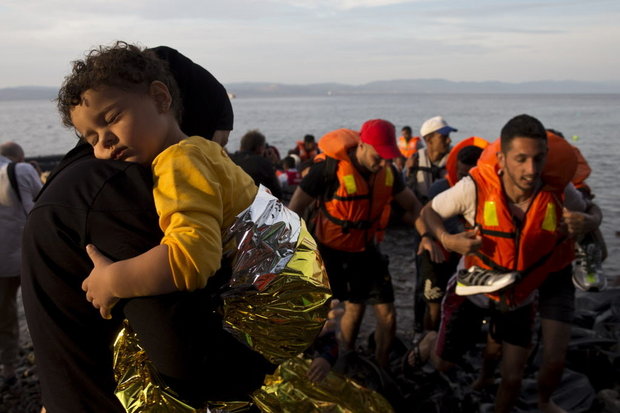 “Why further punish an already vulnerable minority for their actions – when those same actions simply reflect our shared sense of humanity and our fierce instincts for survival?” (Julian Burnside, from ‘You’ve Been Misled on Boat People’, SMH 2013.)

The hostile and often ill-informed attitude towards refugees in our country is a constant source of amazement to me. I know way too many well-meaning, kind-hearted, good-intended Aussies who live their day to day lives by a certain standard of morality; but so tragically, those same people measure the global refugee crises by a completely different set of standards.

‘Queue-jumpers.’ ‘Illegals’. ‘Terrorists.’ ‘ISIS’. ‘Criminals’. ‘Boat people.’ This language has become so normal to us, so mainstream that I feel like we have become completely desensitised by the plight of so many real, desperate individuals. We’ve successfully dehumanised them. Totally ignored the humanity that is represented in those staggering numbers who are fleeing in the masses.  Some misconceptions about refugees are actually so widely adopted in Australia that people can use this rhetoric on national television or on the radio without being questioned or challenged. It’s a mindset, a cultural perspective that’s been driven into us by the mainstream media for decades, and sadly, it’s an accurate reflection of our sordid immigration history. (…White Australia, anyone?)

We block our ears and cover our eyes to the real stories represented in those vast numbers, because guess what? We can! We actually have the luxury of going about our daily tasks without fear of being shot down in broad daylight. Blown up. Raped. Beheaded. The circumstances that so many of these people are fleeing from are so unfathomable to us that I think the less we pay attention to the plight of the individual, the easier it is to ignore the masses, so as not to take responsibility for them. We might casually flick through a newspaper article or hear some headline on the radio and assume that that’s all there is to the story, because hey – it’s on the news! Why question it? Why should I worry about those illegals who have been locked up in offshore detention centres? They tried to jump the queue, they should be in prison! Why didn’t they just come through ‘the front door’, go about things the right way? Come to think of it, why didn’t they just stay in their own country in the first place?

There is a car bumper sticker I’ve seen around that actually makes me feel sick. It’s the kind that say, “Fuck off, we’re full,” usually accompanied by a map of Australia or the Southern Cross symbol. All obvious offences aside, I think the reason that it eats away at me so much is because it’s message is such a hideous one of ‘us and them’. It’s the epitome of ‘White Australia’. It’s selfish and ill-informed. ‘We’ve got to look after our own first’. ‘We don’t have enough to go around.’ ’No room here.’ ‘Go back to where you came from.’

In this instantaneous, quick-fix, digital age, I genuinely fear that we’re bombarded with useless information and as a result, don’t actually seek out anything out for ourselves. We don’t question much, and to be honest, I think that makes it easy to ignore the facts about these people, where they came from and why they’re here.

Without sounding like a broken record, here are just some of the major misconceptions Amnesty International have identified around asylum seekers in Australia and I think you’ll find them all too familiar:

This is only scratching the surface, but I’m sure you are just as familiar with these everyday ‘myths’ as I am. They float around everywhere – on television, in Facebook threads, in everyday conversation (and on those revolting bumper stickers).

Now, if you were to ask me for a political solution to the global refugee crisis as a whole, I’d be honest: I don’t have it. In fact, I don’t think that world leaders even know what to do with it. In terms of Australian politics though, I am 110% sure that detention isn’t the answer. It breaks my heart thinking that we actually have to protest the abuse of refugee children. It is crazy to me that people are buying bumper stickers that say “Fuck off, we’re full”, while men, women and children in detention are suicidal, and not just suicidal: they’re literally petitioning our government asking to be exterminated as a kinder alternative to living the physical, mental and emotional hell of life in a detention centre. (I could really talk about offshore detention further, but perhaps on another post. Comment below if you’d like to discuss it.)  The knowledge of this alone is enough to make someone feel overwhelmed by the sheer weight of it all, and feel as though we can do nothing. I know that’s how I feel a lot of the time.

The thing is, no single one of us can ‘fix’ the global refugee crisis any more than any single one of us can save the world; however, my message here is not one of ‘solve the global refugee crisis.’ My point is simply this: we can, and we should, always treat people like people. We can and should take responsibility for what’s happening in our own neighbourhood, in our own communities and in our personal sphere. We can and should speak up for the families who are being detained in horrific circumstances indefinitely. We can and should do our own research, read independent news sources, and engage in genuine conversations about what our government does in our name. On a personal level, we can and should give people the benefit of the doubt and acknowledge that hey, maybe we don’t know everything about who they  are, where they’re from and why they’re here?
If there’s something I know for sure, it’s that humanity as a whole is in desperate need of some kindness. I know that if I was the one who had fled my war-torn country for fear of losing my life, I’d be grateful for a little bit of kindness on the journey.

On that note, I really want to share a video with you that was created for a food relief program called ‘A Kilo of Kindness’. My church played it on the screens during a service last week and I was totally heartbroken by this family’s journey – and even more than that, I was moved by the way their lives had been touched by a little bit of kindness in a new country.

This is one personal story that has reinforced something I am sure to be true: only the most vulnerable and courageous people get on dangerous and rickety boats in search of safety.

I will say that while I was totally broken by this story, of course this video received a very mixed reception on social media. While many expressed the same response of compassion and empathy that I felt, there were others who were absolutely offended by the idea of kindness towards a Muslim family who came here by boat! Some of the negative comments I saw on this thread included: ‘Are you serious? These people want to kill us!’… ‘Surely there are other countries closer to Iraq than Australia? Why didn’t they go there?’ and those of the laughable kind, targeted at the video culprit: ‘I’m out. Hillsong you’ve lost my support.’ While a part of me wants to shake these people and reply ‘Are YOU serious? Did you even watch this video?’, again, I have to acknowledge that these responses aren’t necessarily a reflection of a cruel and heartless Australia. In most cases, this is actually a reflection of the widespread attitude towards migrants that has long been cultivated by politicians and the mainstream media into our culture.

My point is that within the masses of people fleeing war-torn countries, these are individual human beings with individual stories and I genuinely feel that – in this crazy era of ‘the boat people’, and ‘us and them’, and Muslim-hate, and fear-mongering – it is our responsibility to look after each other.

So where do we start?

I think we have to take control of the conversation. We have to question what we see on the news, hear on the radio… We have to see the humanity in those masses. The vulnerability. The terrifying circumstances it would take for YOU to uproot your entire life and leave your beloved country in order to survive.

What would you do if you found yourself living under an oppressive regime, hiding out, scared for your life?  I know for sure that if it were me and my loved ones, I would run for my life. Further to that, if I happened to survive the dangerous journey to a country who were signatory to the UN Convention (for example, Australia) I’d ask for protection.

My opening quote was one by Julian Burnside: ‘why punish an already vulnerable minority for their actions when those same actions simply reflect our shared sense of humanity and our fierce instinct for survival’? It’s such a sobering point.

This is a highly complex issue and you are entitled to your personal political opinion.

But I implore you: place yourself into these stories. For real. Put yourself into the shoes of that terrified, persecuted man, woman or child who lost everything and instead of a welcome at the other side, received a big ‘go back to where you came from.’

From that ‘shared sense of humanity’ I am ever hopeful that in time, these attitudes will change – person to person.

‘You’ve Been Misled on Boat People: Here are the Facts’ Opinion piece by Julian Burnside for the SMH http://www.smh.com.au/federal-politics/political-opinion/youve-been-misled-on-boat-people-here-are-the-facts-20130718-2q5rv.html (Note: this article is also the source of my opening quote by Julian Burnside).